ArcanaPress—Preserving and Promoting the Tarot Legacy

Tarot is a fascinating cultural artifact that is misunderstood and largely unappreciated in the English speaking world. It's time to change that.

The numbered suit cards: Rods, Coins, Swords, and Cups of traditional Tarots, show only the suit emblems and floral motifs (not scenes), so they must be understood differently.

Cards 1-9 are divided into three groups of three cards each. Each 3-card group represents a major stage of an undertaking in the realm of their suit.

Cards 4, 5, & 6 represent the Opposition Triad—the difficulties one faces in that undertaking.

Cards 7, 8, & 9 make up the Equilibrium Triad—The endeavor is mature and fully functioning. One has dealt with problems and made necessary compromises while still achieving much of one’s intended goal. Think of the cards arranged this way with each 3-card group mirroring the larger larger triad so that: 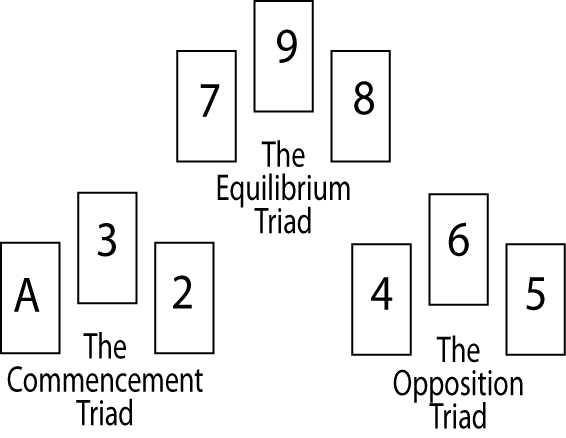 In the Commencement Triad:

In the Opposition Triad:

In the Equilibrium Triad:

EXERCISE 6 is a 3-card spread beginning with a pip in the suit of cups. We will read these cards simply for a message with no specific question asked. Take some time to study the cards and see what message comes to mind. Use the triadic method of interpretation explained above for the pip card. ###  Posted 10•19•19 (Also posted today is a possible interpretation of the 3 cards of EXERCISE 5.)

Possible Interpretations: We begin with The Two of Cups, Opposition of Commencement. Cups is the realm of emotions so human relationships and spiritual commitments. It would indicate that the querent (or you) have been considering a new relationship, weighing the pros and cons. The Wheel (of change) is in the center (present moment); it is tilted right causing the falling figure to rise — a fortuitous change, perhaps a reversal of injustice. Maybe hesitancy to commit to a relationship was due to the querent’s life circumstances, but now things are looking up. The Chariot coming next, shows a person triumphantly taking charge of his or her life. A very positive outcome!  ###  Posted 10•24•19

Marseilles Minis are short exercises that teach an intuitive image-based style of interpretation. 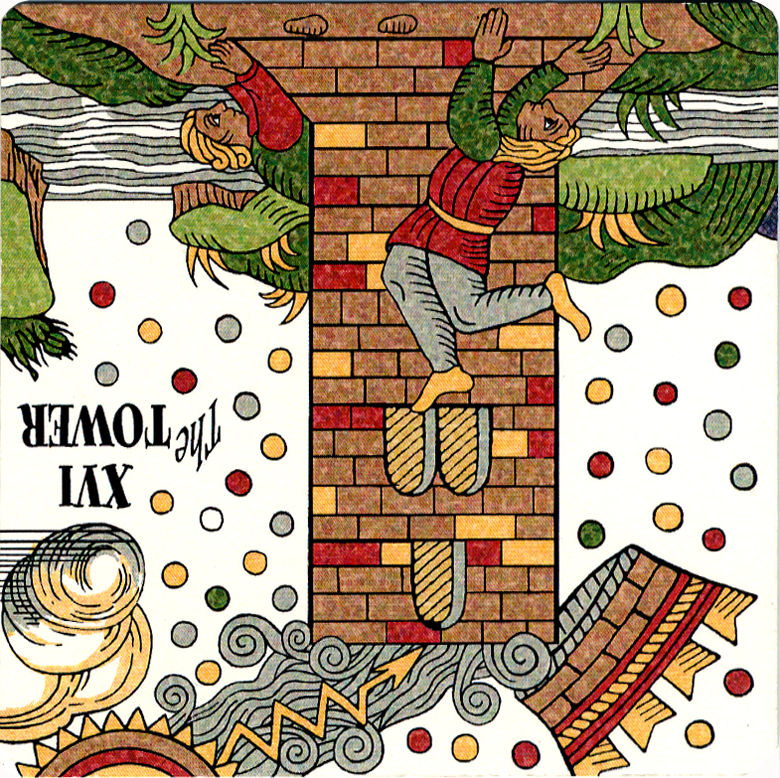 The lessons begin with this single card and interpret it under three different circumstances.

First: As a source of inspiration for the day.

2nd: As advice in a troublesome situation.

3rd: Adjusting after a life-changing disaster.

Start a notebook to record your interpretations of the card in each context. This card has not yet been discussed in the ARTICLES section, so simply let the image itself speak to you. There are no wrong answers.

In 1-2 weeks, possible interpretations will be posted. If they differ from your own, you may want to note them as alternative interpretations.  Please make your own effort before reading on. ###  Posted 4•29•19

Possible Interpretations: First (a source of inspiration): The people are rising. It is important to stay above the petty jabs and destructive antics of those who simply want to cause trouble. Stay focussed on your goals and aspirations. 2nd (a troublesome situation): There will always be those who oppose new and innovative ideas. Stay positive, be above the fray, don’t make it part of your life. Sometimes traditional attitudes must be overturned (crown is falling upside down) to allow you to follow higher principles that serve the greater good.3rd (a life-changing disaster): Sometimes a disastrous event, can, after the initial shock, be strangely freeing. It makes you reevaluate what is really important. It may even cause a “lightness of being” when you realize that you are no longer bound by the burdens and superficialities of your previous situation. In this new reality you are free to choose. ###  Posted 5•8•19

EXERCISE 2 (3-Card Reading): Let’s add 2 cards so you can see how cards relate to each other in a reading that follows a life-changing event.

We have not yet discussed suit cards in the ARTICLES section. So this is a short introduction: Cards 1-9 of each suit are divided into three groups. Cards 1-3 constitute the Triad of Commencement (commencement means beginning). This is the first group. In a traditional 78-card Tarot de Marseille, they would be three separate cards. In THE TRIADIC TAROT the three images appear on a single square card, but only the top image is read (It is as if the other images were not even there.)

The Commencement Triad relates to a new undertaking in the realm of the suit. When, however, you are using the Triadic Tarot, and this card falls upside down, it discourages the start of a new project (at the top it says, ”Not time to begin a new project”).

Write your own interpretation of what this 3-card spread might be saying. There are no wrong answers. Posted 5•8•19.  Suggestions will be appear below in 1-2 weeks. .

Possible Interpretations: The spread begins with The Tower reversed, showing the people rising rather than falling, so although there has been destruction or disillusionment on some level, it is strangely freeing for those involved. Card 2 is the Triad of Commencement reversed. In the Triadic Tarot, this suggests that there should not be a rush to begin a new project right away. It is too soon. One needs to take time to think through what has happened and internalize any lessons that may be relevant to the future. Card 3 is The Justice which strongly suggests that thoughtful analysis and careful deliberations are in order when considering future options. (Note that to the right of the Justice there is a clear sky with birds flying freely. Whereas, on the left of the card (her right), rain is falling against the Ace of Rods further reinforcing the suggestion that rushing too quickly into something new would be unwise. This is a case where it is fun to see a connection to that side image of the Ace). 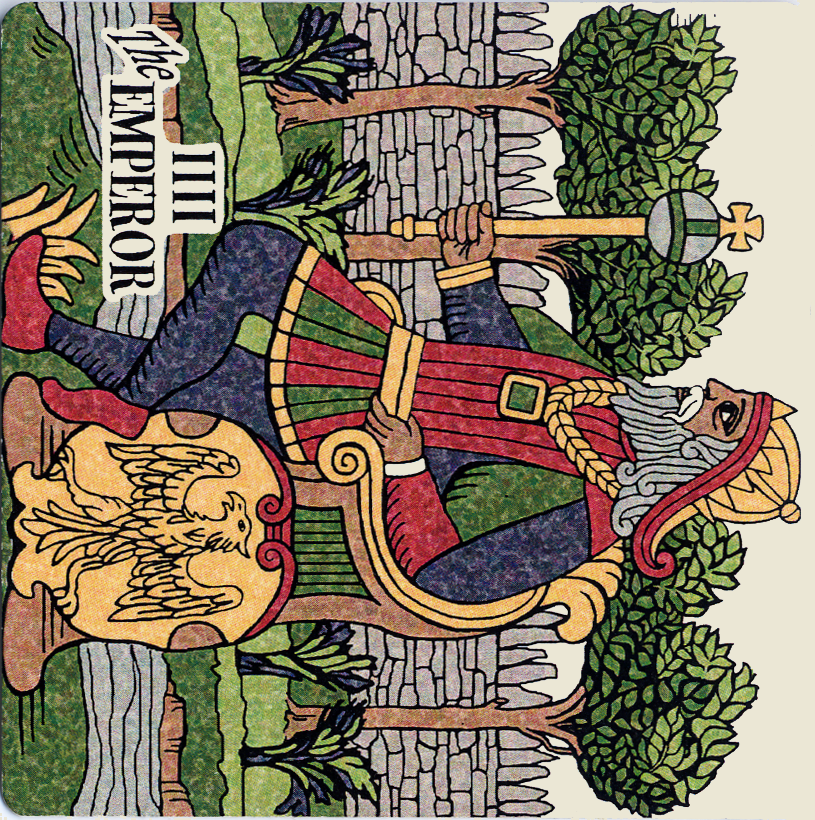 EXERCISE 3 (Single Card Draw): Interpret the card as shown here (tilted right). Again, for practice, we will interpret it as if it was drawn under three different circumstances:

First: As a source of inspiration for the day.

2nd: An awkward situation has arisen at work. It has been reported but it is not yet resolved.

3rd: You have always looked up to your father as a mentor, and count on not only his love and emotional support but also his technical support and business savvy as you launch your new business venture. Will you be successful?

Record your interpretations for this single card if it were drawn under each of the three situations above. This card has been briefly discussed in the ARTICLES section;  you may want to read it. In 1-2 weeks, possible interpretations will be posted. They may differ from your own—that’s fine. This is all just practice. ###  Posted 5•17•19

Possible Interpretations: First (a source of inspiration): The Emperor’s regal scepter or staff has risen to the top giving it importance. As a source of inspiration, one might see this as a reminder to think carefully about the use of authority, avoid abuse of power. A leader, is an example for others. 2nd (an awkward situation at work): A figure on its back is weakened, either pushed back, held back or perhaps just hesitant. Office politics are often complicated. There may be reasons (unknown to you) why this person is hesitant to take steps to resolve the situation. It may be a test of your ability to solve the problem in a diplomatic way. Consider your options, and act in a way that allows others to save face. 3rd (needing assistance in a new business venture): The father or mentor you counted on for help and encouragement may not be able to help you now; perhaps he is dealing with a difficult situation such as illness, or mental decline. He may be occupied caring for an ill spouse. You will need to be self-reliant now and perhaps offer your help to him.

Can you see that even a single card contemplated in response to a particular situation can bring new perspectives?  ###   Posted 6-2-19

EXERCISE 4 (3-Card Reading):  Using the Emperor you are now familiar with, we will add 2 cards for a 3-card spread.

We are faced with two more suit (pip) squares, still not having explained the triadic reading system fully; so I will explain as we go. Again, cards 1-9 of a suit are divided into 3 groups of 3 cards each.

We will discuss how each triad (group) of 3 cards is a reflection of the larger triad, but for now, remember that when a multi-image pip square comes up in a spread, you only read the top image.

The central square above shows card 8 of the Triad of Equilibrium. Card 8 of any suit is called Opposition of Equilibrium (abbreviated Op. of Eq.). This means that we are dealing with a mature undertaking, but something has come up that requires swift action. It is the suit of swords (tests & challenges) so it is a “touchy” situation.

The next square shows the Triad of Opposition–opposition to one’s current undertaking. On this Triadic Tarot card, however, the top triangle is empty, meaning an absence of opposition—a good thing!

Begin with the Emperor; you already understand him, then use your imagination and see how the next two cards might inspire a story. Admittedly, this is a challenge at this stage of your understanding, but you only learn by jumping in. You can do it—just give it a try. There are no wrong answers. Actually, my explanation of the stages has pretty much spelled it out. Annette@ArcanaPress.net   ###  Posted 6-2-19

Possible Interpretation: The spread begins with The Emperor who may represent your boss or some other significant authority. The figure is on his back so he is weakened in some respect (perhaps temporarily); his authority, however, is emphasized by the scepter being held up. The next card is card 8 in the Triad of Equilibrium. This stage is Opposition of Equilibrium, so it represents a difficulty that has arisen in an undertaking that itself is challenging (Swords suit), but mature. The 8 of a suit calls for executive judgment and swift action. Because of the weakness of the authority figure, you or some other person may have to take on that responsibility. The third card is the Triad of Opposition of the Rods Suit. Since the suit of Rods is one of birth, growth and development, it would refer to some creative project or educational program that is underway, presumable one that might be affected by the situation above represented by the 8. In the Triadic Tarot, however there is an empty triangle that negates the oppositional stage of the Rods project saying, “there is NO opposition at this time.” This is good, and a reader might be inspired to add that temporarily standing in for a superior is good training and if handled well, will raise the respect for and the status of that stand-in.  How did you do?  ###  Posted 9•5•19

EXERCISE 5 (3-Card Reading):  Sometimes a reading is done without a topic-centered question. A person, or you yourself, may simply say, “What message do the cards have for me today?” Use your own intuition to see a message in this selection of cards.    ###  Posted 9•5•19

Possible Interpretation: The spread begins with The Trumpet which represents an important message or a call to duty. When tilted right it may signify losing focus on that duty, or doubting one’s inner guidance. An opportunity may be slipping away. The next card is Temperance which suggests the healing arts and rituals of sanctity and grace. Being in the center it represents the present time and you (or the querent) since you are always at the center of your world. The third card is The Priestess, who represents knowledge, wisdom and sacred mysteries. She is tilted left facing down which may mean extreme discretion protecting sacred knowledge, or she may be teaching that sacred knowledge to someone below. (The reader may choose to draw a card to place below to indicate the object of her gaze.)   ###  Posted 10•19•19

© 2020 ArcanaPress—Preserving and Promoting the Tarot Legacy — Powered by WordPress

Theme by Anders Noren — Up ↑